Author's Note:  My blog post this week is a story that I first wrote many years.  During the past few months I have edited this naval story signficantly and run it by my writers group and a couple of writing instructors for ideas for improvement.  I thought it would be fun to post while we await the next installment of my retirement and/or travel articles.  I hope you enjoy. 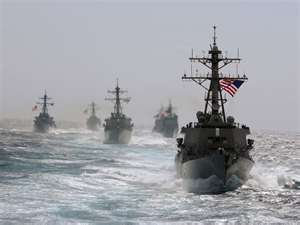 Fleet Underway
A FAULTY RELAY
We were steaming south of Samatra after concluding a port call in .  Most of us were glad to be back at sea so we could start the northeastward trek for our homeport in after nearly 4 months in Southeast Asian waters.  Our job was the usual monitoring of the oceans and skies around by ships of the U.S. Navy’s 7th Fleet.
The hourly reports were in and I recorded them in the Engineering Log Book.  Everything for 0300 hours was accounted for.  Now I was ready to settle back and spend another uneventful hour of listening to the hum of the engines before turning the watch over to Brenner.  I knew he would come down the hatch in a half hour or so groping along, as he always did with blurred, sleepy eyes and hollering for his coffee.
I almost felt guilty allowing him to relieve me, since upon signing the Log Book and climbing the ladder out to the main deck I would go back to my berthing compartment and snuggle into my bunk for a few hours of sleep.  The engine room would not be my concern for a while.  Instead, it would be Brenner’s job to keep the engine, pumps and generators running smoothly. 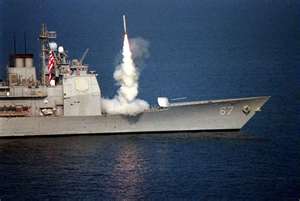 Missile Away!
I listened to the steady twelve-knot whine of the turbines and felt the gentle vibration of the deck plates in the control booth.  Almost everything was as it should be.  Each piece of machinery played in perfect harmony.  The only annoyance was the rhythmic chatter of an intermittently faulty control relay in the main electrical switchboard which couldn’t be fixed until we could shut the switchboard down.  It wasn’t a big concern to us so we learned to live with its occasional staccato clicking.  Yet after a time, it too seemed to be part of the perfect lullaby. 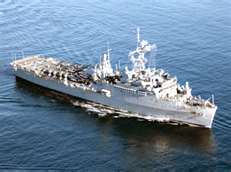 Amphibious Transport
When the phone rang, I answered it with efficient ease, thinking it was only a trivial report of some kind.
“Engineering Officer of the Watch,” I said.
“Eric?  How fast can you bring us to twenty-eight knots with only two boilers on the line,” said Captain Dave Edwin.  There was urgency in his voice.
“I can do it in ten minutes for normal acceleration, Sir,” I replied.  “I can do it faster if the engine temperature steady out quickly.”
“Ok, Eric, here is the low down.  Give me whatever speed you can.  We’ve picked up distress signals fifteen miles of port (side).  It is a small burning freighter.  There has been a lot of strange activity going on tonight on the signal channels.  I’ll be in touch.”  The captain clicked his handset off.
“Aye, aye, Sir,” I hung up the receiver knowing that he did not hear my response.

Author at the Engineroom Throttleboard.
Immediately I ordered Doug, the throttle man, to commence increasing speed and ensure to maintain proper steam pressure at the main engine turbine.  I directed him to ring the bridge at each speed change through the engine order telegraph.  I reached for the engine room intercom and ordered all my watch standers to be extra attentive to their duties.  There was Louis down on the lower level looking after the feed water and condensate pumps as well as the oil purifier.  was near the boiler controls and Larry was on the upper level keeping an eye on the electrical generators and main turbine.  Phil was back aft.  By now, he was making rounds through the two shaft tunnels to ensure the shaft bearings were cool.  He was responsible for taking readings and putting them in the engine-room equipment log sheet.
Each man was making sure all their equipment was operating properly and I was sure they would do their job well.  Meanwhile I monitored the steam pressure and advised of our steam demand.  I knew we needed the 1200-psi boilers he watched over to provide our steam generators and main turbine an increased steam supply for increasing the guided missal destroyer’s speed.
We increased speed gradually and the ship shuddered as if some great beast aroused from its sleep.  The engine whine increased.  When the engine temperatures leveled off for twenty-eight knot operation, I immediately called the bridge. 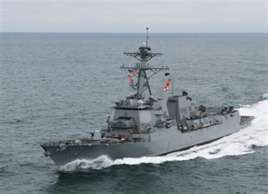 Full Steam Ahead
“Captain, I said over the phone, we are at top speed for two boiler operation and we are commencing to light off the other two boilers so that they can be up to full steam capacity within the hour.  I’ve set the ‘maneuvering combination’ and we’re ready for all orders, Sir.”
“Fine, Eric!”  Captain Edwin said.  “Be advised, we’ll be going to General Quarters in three minutes.  We are ready to engage enemy aircraft.  That is all.  Good luck!” he said matter-of-factly and hung up.
I was shocked.  Only three days ago, we had left .  The news had been still of détente.  Three weeks ago, the Russians in Java had been friendly.  My mind began to race.  Aircraft?  Enemy?  I thought we were going to the aid of a stricken ship.  What happened?
The sudden flash was so luminous and the searing heat so intense, I did not notice the force that catapulted me through the sheared upper deck plates.  Suspended in air for a moment, I realized a force that had just ejected me out of the engine room now held me.  Then it was letting me drop ever so rapidly.  Every limb ached and I could hear nothing.  I descended so swiftly, the water under the burning oil slick that I plunged through quickly enveloped me.  After what seemed like an eternity underwater, I surfaced and gulped for air.  I was swimming, using frantic splashing motions to keep the flames away while continuing to gasp for air.  When I finally broke clear of the flaming oil slick, I looked around.  I was amazed I was still intact, even though I still could not hear anything.  There were no broken bones, and I was not flayed alive.  Around me, there was nothing except patches of burning oil and bits of debris.  There was no ship.  What had hit us?  Moreover, although it was difficult to see without full daylight, there appeared to be no survivors except me.
As thoughts of sharks and drowning whirled through my mind, I wondered if anyone would find me as I continued to swim clear of the flames and oil.  This was all so bewildering.  There seemed to be little hope.  My predicament was appalling and now I was so tired.  I was sure the water was going to suck me into its eternal grasp….

Author in front of some engineroom equipment.
“Eric, wake up!  What’s wrong with you?  You aren’t suppose to be sleeping.  But, since you were, did you dream about a blonde or a brunette?  Who cares?  Let me take over?  You are looking pretty washed out!  This exciting life must be getting to you.”
“Brenner!  You made it!  You are safe, too!”  I said.
“What the hell are you mumbling about?  You better go to your bunk and finish the dream,” Brenner said.
“Ah, no thanks!”  I said defiantly.
When I had signed the Engineering Log and turned over the watch, I sheepishly left the engine room and climbed the ladder to the main deck.  The fresh sea breezes slowly refreshed me.  It was then I realized I had forgotten to tell Brenner about that annoying and hypnotic relay.  What the heck, he would probably only dream about blonds or brunettes anyway, if he even dared fall asleep.
Final Note:  Pictures of ships are open source available on the Internet.  The two of the author where taken in the Sixties!
Copywrite by John D. Roach, August, 2011.
Posted by jdroach at 10:49 AM