Note:  As many of you know, I worked on macro and close up photography during the Winter 2011-2012 and into the early Spring 2012.  During, Spring I also started to participate with others going out at least once a month to do night photography.  Night Photography is always an exercise in total manual control to get the best exposure and light capture as possible.  The last time that I had done night photography was in late 2010 while in Chicago.  The following is a brief review of my experiences in March and April of this year with night Photography with some comparisons to my Chicago work with an introduction to the concept of white balance.  I plan a series of articles about white balance during the coming months.

White Balance in photography is something that many digital camera owners don’t understand or use.  I admit that early on in my photographic study, I had little appreciation for it, because I didn’t understand it.  It is an area that we all need to understand because it dramatically affects the results of an image we create.

While white balance settings are important at anytime, it wasn’t until I started to experience how light occurred before sunrise and after sunset and at night that I truly began to appreciate how important the white balance settings are.   Simply put, white balance is a way to get the colors in our images as accurate as possible straight out of the camera.  It is possible with digital photography and the post processing software such as those created by Photoshop to adjust it after the fact.  However, we need to keep in mind that after the fact means just that.  We are working on memory to determine what the color was when we took the picture.  Sometimes we cannot remember what the color really was.

Why do we need to get the color right in your shots?  It is all about examining shots after taking them where we find an orange, blue, yellow, etc. look to them that might not seem quite right.  Image making with a camera is all about capturing the light.  Variations in how the sensor in the camera reads the light when the picture is taken is the reason why the looks like it is effected by different sources of light have and thus have a different ‘color’ (or temperature/Kelvin rating) to them.  Fluorescent lighting adds a bluish cast to photos whereas tungsten (incandescent/bulbs) lights add a yellowish tinge to photos.

Most digital cameras capture images based on how the light is interpreted by the camera sensor.  In a digital camera’s software, there are many ways to adjust how the sensor sees the light.  The range in different temperatures ranges from the very cool blue to warm like a candle is the setting of white balance.

The human eye adjusts automatically for it, but the camera sensor needs help.  It needs to be told how to adjust for light.  Indeed, the sensor can be confused when there are many different light sources.  Therefore, unless the temperature of the light is extreme a white sheet of paper will generally look white to us.
However, a digital camera doesn’t always know how to adjust automatically and sometimes will need to be told how to treat different light.  However, currently, cameras are being made with ever improving internal software capabilities.  Sometimes the automatic white balance feature does a very good job of sorting out what is best particularly when the light sources are confusing such as at night in the city. 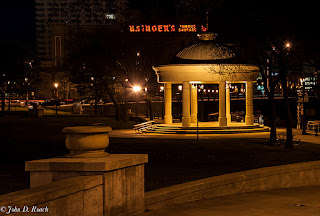 Different digital cameras have different ways of adjusting white balance so the photographer needs to use his camera’s manual to work how to make changes and by experience discover what works best.  Many digital cameras have automatic and semi-automatic modes to help you make the adjustments.

Here are some of the White Balance settings that are commonly found in digital cameras:


In most cases, an accurate result using the above preset white balance modes will get the colors right.  It is important to practice and create in your own mind what works for your camera.  Remember, not all cameras are the same in the way they see light.

Some cameras have the ability for the photographer to adjust the while balance with his or her own pre-set adjustments.  A white or grey card is a way to do this wherein the photographer takes a picture of the white or grey card in the existing light.  That image then is used as the basis for adjusting the temperature of the scene so that the sensor can more correctly discern how to compensate for the light and provide the best color rendering.

This introduction and examples of my experience is the beginning of a tutorial on white balance that I will share with everyone.  As we go forward, I will explain the following in more detail:

1.      Definitions and concepts for reading white balance and color.
2.      Visible light as tiny portion of the electromatic spectrum that humans can perceive – with graphic examples
3.      RGB vision in humans – early investigation by and others including the ability of the human eye and brain to perceive color – using examples.
4.      Kelvin scale – the range of color temperatures with examples.
5.      Shooting in RAW vs. JPEG and the impact on the ability to adjust the color.
6.      Why is it so hard to get the color right after you got it wrong – can humans really remember color effectively to do this?
7.      Explanation of each white balance pre-sets including the white and grey card pre-set process.
8.      Discussing about exposure, light, white balance, incident, and reflective light metering.
9.      Night Photography and the hazard of getting the color right!
10.  Color management – managing color from image capture to printing of an image.

When I first created images at night, I new little about white balance and how important it was to establish the correct tonality.  During an evening in October, 2010 I began to experiment.

At first, since I wasn’t sure what the white balance should be, I left it on Daylight setting or shot in Automatic.  Sometimes the color worked and other times it didn’t work.  In the end, I discovered that it was best to practice with various settings for white balance then pick what appeared to work best.  In some instances, I corrected the white balance later in post processing to get the color the way I thought was best for what I was trying to communicate.  Here are view images from that first night photography outing back in 2010. 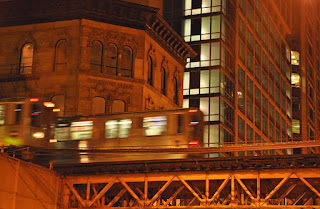 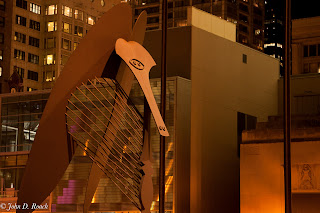 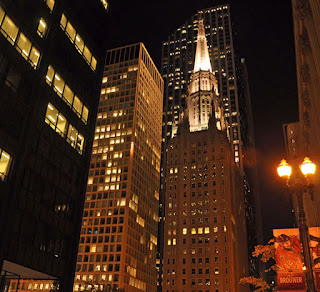 Board of Trade (daylight white balance and a bit too warm perhaps): 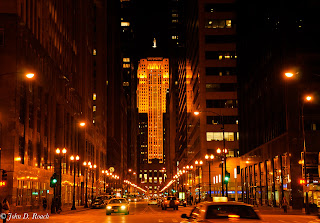 Note:  A fine art dealer in purchased this image from me for a client.  That is in spite of the white balance was at times being challenged by some photographers who saw the image.  It just shows that color, light, and tonal effect is very subjective.  Art is very much in the eye of the beholder.  I happen to like the warm colors of the image, but the night scene was really cooler then this image depicts.

In March, here in , I practice using various tungsten and fluorescent white balance setting to determine the results.  The following are examples taken north and south respectively at the State Street and the River of this effort:

In April, after several discussions with photographers in a local camera club as well as my fellow Nikonians at www.nikonians.org I elected to use automatic white balance again with pleasing results.  The following are some examples: 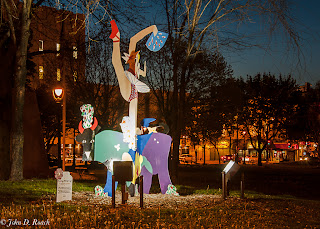 Two variations of the River Walk looking south toward the City along the : 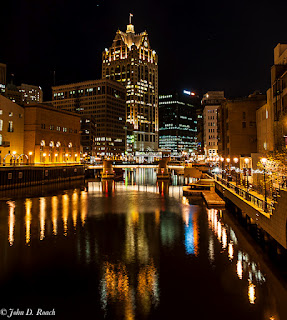 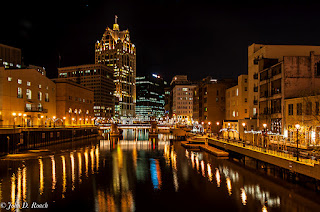 Wow, I Guess I missed the Bus (a study in motion)

Looking East on Kilbourn (study in light and motion):

I post this introductory information and images to show how much white balance can affect the results one gets when taking pictures at night.   While at first it might seem like, for night photography, an argument in favor of automatic white balance, I will just say, it works with my Nikon cameras very well when there are many confusing light sources.  However, I highly recommend capturing images in RAW and using several different white balance experiments to determine what works best.

Note:  Soon, I will be developing a series of articles to post here in this blog about white balance both during the day and at night.  It will also to be posted in my local camera club newsletter.